The Reno Rodeo Flag Team is an elite group of women with excellent riding ability and personality. These cowgirls are chosen through a non-partial, unbiased tryout to represent the Reno Rodeo and the Association not only in June, but throughout the year. The Reno Rodeo Flag Team will grow to 55 members this year. The Reno Rodeo Flag Team will be one of the largest Flag Teams in the nation. Once the riders have been chosen, they gladly volunteer endless hours of their time to perfect the flag presentation of Old Glory our National and Local Sponsors in the opening ceremonies and throughout the evening in all nine performances. These cowgirls also participate in a finely tuned choreographed drill prior to each performance. Don't miss out! Cowgirl up!!! Get your application in today. 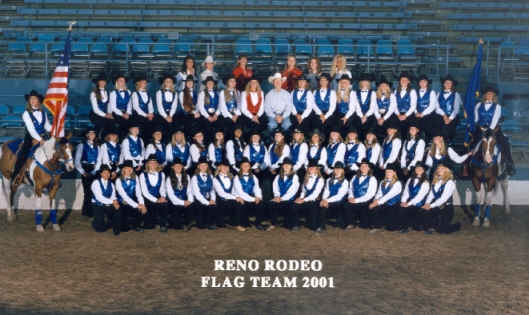 Reno Rodeo is proud to invite 16 teams to compete in this year's drill team competition to be held June 20, 2003 at 8:00 a.m. at the Reno Livestock Events Center Indoor Arena. To maintain the high standard and quality of the competition, Reno Rodeo will only allow 16 teams the opportunity to compete in this year's competition. The first 16 teams that have their completed application returned on or before May 3, 2003 will be allowed to compete. Competition will begin at 8:00 a.m. in the order of draw. The Judges Meeting will be held June 19, 2002, Thursday afternoon, at 5:30 PM in the Presidents Room which is located above the bucking chutes on the East side of the Outdoor Arena. The draw for positions and review of drill criteria with the judges and drill masters will be done at that time.

Entry Fees: Drill Competition: $50 per Team Parade (Mandatory): $20 per Senior Team $15 per Junior or Mixed Teams Stalls: $15 per day. Stalls will be available Wednesday, June 18, 2003 (at no charge for Wednesday only) through 10:00 a.m. Sunday, June 22, 2003 ONLY. One (1) bale of shavings per stall is provided. Please provide your own feed. It may be purchased at the Events Center or nearby. Entry Deadline: May 3, 2003. Please enter as early as possible. The Reno Rodeo Association also requires that all teams be entered in the Saturday Parade.

Drill Team Divisions: Senior: Open to any team with the majority of riders 18 years of age or older as of January 1, 2003. Junior: Open to any team composed entirely of riders who have not reached their 18th birthday as of January 1, 2003.. Mixed: Open to any team with riders of both ages, both junior and senior. A rider may compete in only one division, except when in an emergency substitution of riders. A horse may be used by more than one team. Emergency Substitution of Riders: The Drill Team Chairman, in an emergency such as illness of horse or rider, loss or breakage of equipment, shall allow not more than two juniors to ride with an adult team or two adults to ride with a junior team. Such emergency shall be defined as having occurred on the way to the Western States Drill Team Competition, at the competition, or in the vicinity thereof. The decision shall be left solely to the discretion of the drill team committee.

orse / rider Minimum: In the Senior and Junior Divisions, a minimum of 12 horses and riders shall constitute a team. For the Mixed Division, a minimum of 8 horses and riders shall constitute a team. Junior or Senior teams with 8 - 10 riders may compete in the Mixed Division without penalty, but are encouraged to achieve the minimum of 12. Matching of horses and equipment: In any division in this competition, matched horses (same color) and tack (saddles) are NOT required. It is to be noted that all matching horses and identical saddles present a very pleasing appearance, but do nothing to improve a team's drill execution and performance, and today, can be very expensive to achieve. With the exception of saddles and bits, teams are encouraged to have matching tack and attire. Time Limit: A maximum of 12 minutes for the Free Drill and a 4 to 6 minute window for the Short Program Drill will be allowed. Time will be taken from the first rider in to the last rider out. Time out may be allowed by the judges in case of an accident. An official timer(s) will be selected to time all the drill teams. Penalty for over time shall be 2 points for each minute or fraction thereof. Markers: No markers will be allowed in or around the arena for use by the drill teams during the competition.

Falls: If a rider(s) falls as the result of a collision with another rider(s), 25 points shall be deducted for the fall. If a fall occurs not resulting from a collision, only 5 points will be deducted for that fall. Costume / equipment changes: Since the Inspection is no longer a factor in the judging, teams which have more than one set of costumes may use different costumes for each drill. No extra points will be awarded, nor will teams which do not change costumes by penalized. Disqualification: A team will be disqualified if, after starting their drill, any horse and rider leave the arena and later return to the arena. If a rider is injured, he / she may receive permission to leave the arena without penalty. Drill Captain: No Drill Captain or any other rider will be allowed to stand or direct in the arena on or off horse while the team is competing. During any drill, only those horses in the active drill will be allowed in the arena. American Flags: Each team must carry a minimum of one American flag and observe correct flag protocol at all times. The American flag may be posted in the arena if desired. Judges Meeting: The Drill Team Chairman will hold a meeting with the judges and the Drill Masters to review the various categories on which scoring is based. A draw will be held for team positions in Free Drill and Short Program Drill. At this time, the Judges Explanation Sheet for Short Program Drill will be turned in by those teams competing in Short Program. Judges: There will be three judges engaged to judge the competition. The judges will not converse with anyone. There will be a maximum of seven minutes between teams to allow judges to compute scores. A secretary will deliver the score cards to the Drill Team Chairman. The winner will be determined by adding together all the scores and dividing by hree. The team with the highest average will be declared the winner, next highest average, second, and the next highest average, third. 1st, 2nd and 3rd place positions can be contested at or before the parade on Saturday, June 22, 2002. If valid, a team may be required to rescind their prize and money. If these positions are not contested by such time, all awards will be final.

The Drill Team Chairman, in an emergency, such as illness of horse or rider, loss or breakage of equipment, shall allow not more than two juniors to ride with an adult team or two adults to ride with a junior team. Such emergency is defined as having occurred on the way to the Western States Drill Team Competition Championship, at the competition or in the vicinity thereof. The decision shall be left solely to the discretion of the drill team committee. Any markers set either in or around the arena for use by the drill teams during the competition shall be prohibited.